It was time to go from problem read the previous blog post to solution and therefore we created wireframes of the concept. We chose one question that we felt we haven’t got the answer yet, which is:

How can we create an inspiring product that motivates the user to learn the keyboard while having fun?

We gathered the whole project team to have a design studio workshop, everyone joined and we were 8 people in total with different roles and perspectives on the project. Two people in the project group also has a visual impairment and therefore expert knowledge about typing tutors. 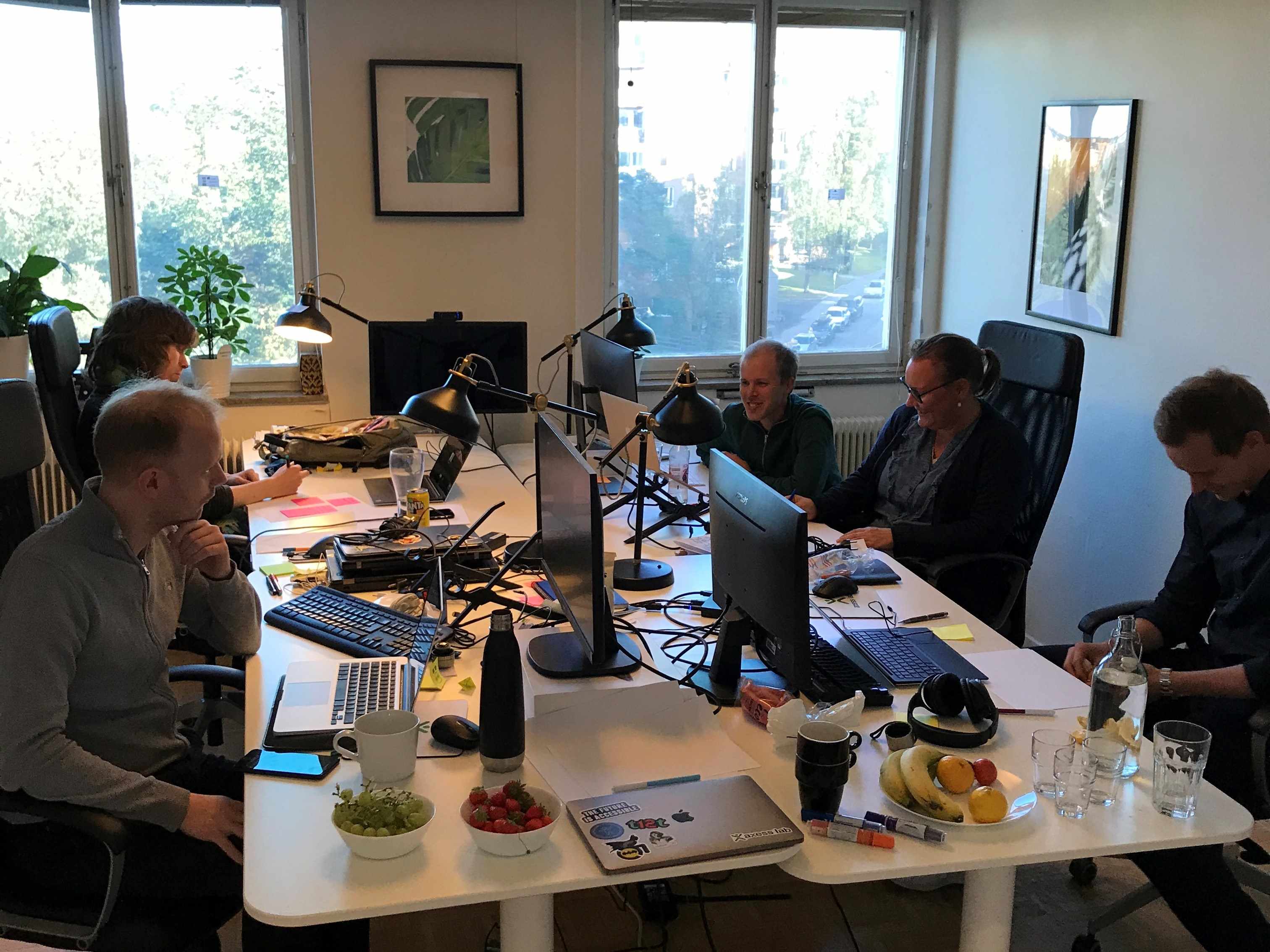 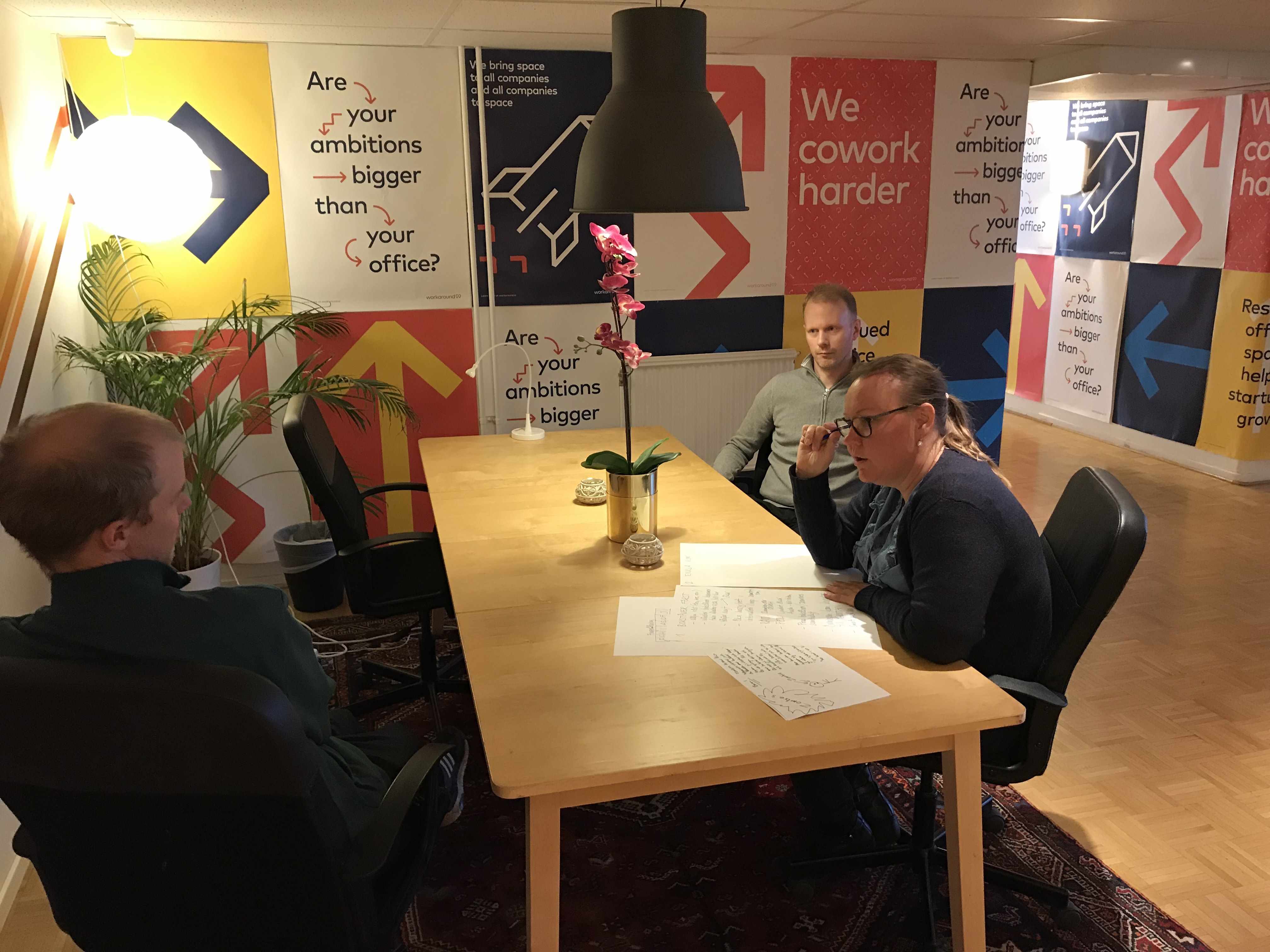 We did three different exercises in pairs and built on each other’s ideas for typing in the dark. At the end we chose the idea that most people felt that we wanted to move forward with. 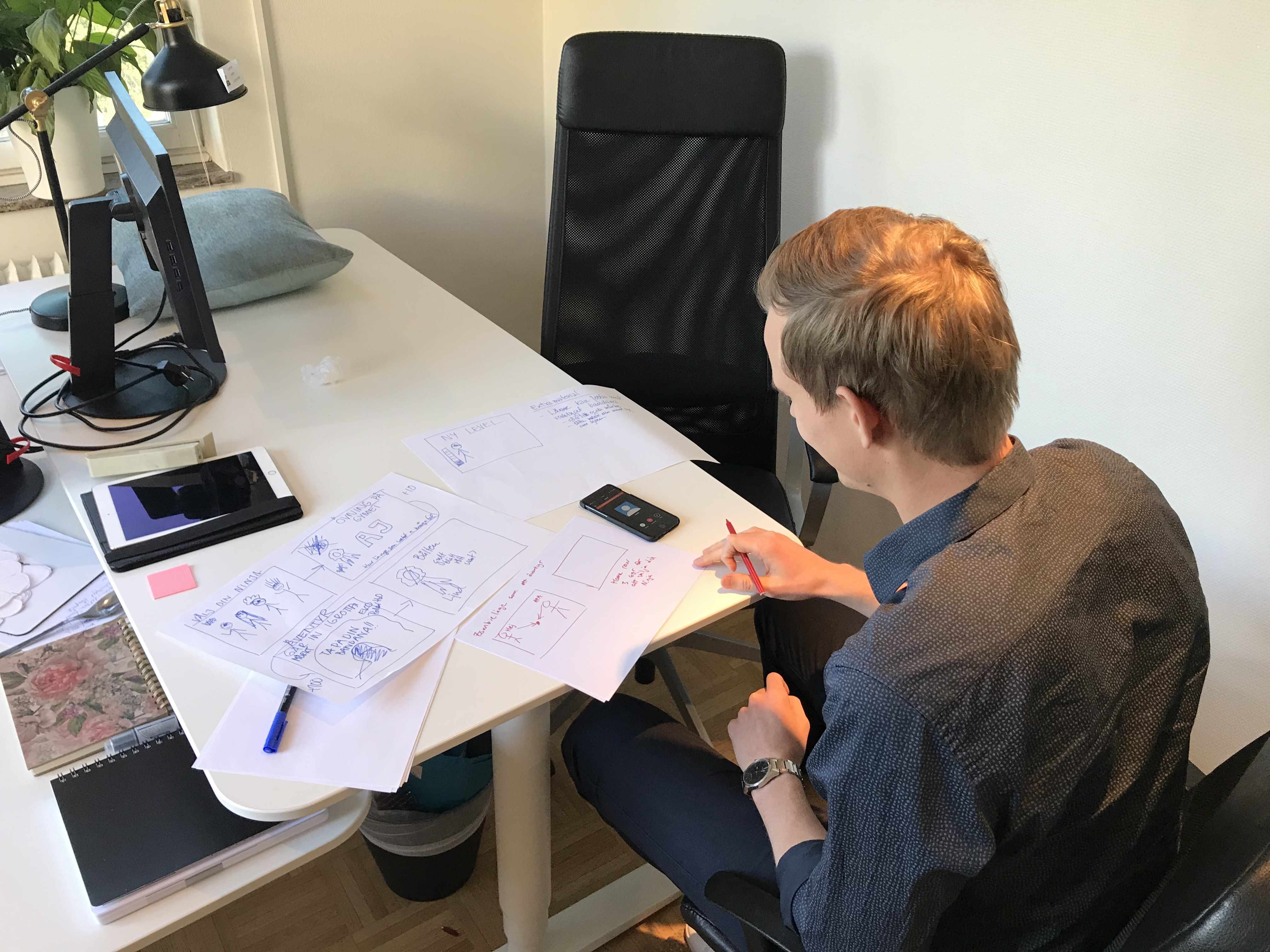 It was a ninja game that had a storytelling and a level based game. First you chose a ninja you train the character at the gym like Pokemon go. After that you go into a dark cave and there you get a challenge if you do the challenge well you can get different grades of karate belts from red to black. So this is a hypothesis we wanted to move forward with the gamification in combination with a logical way to learn. 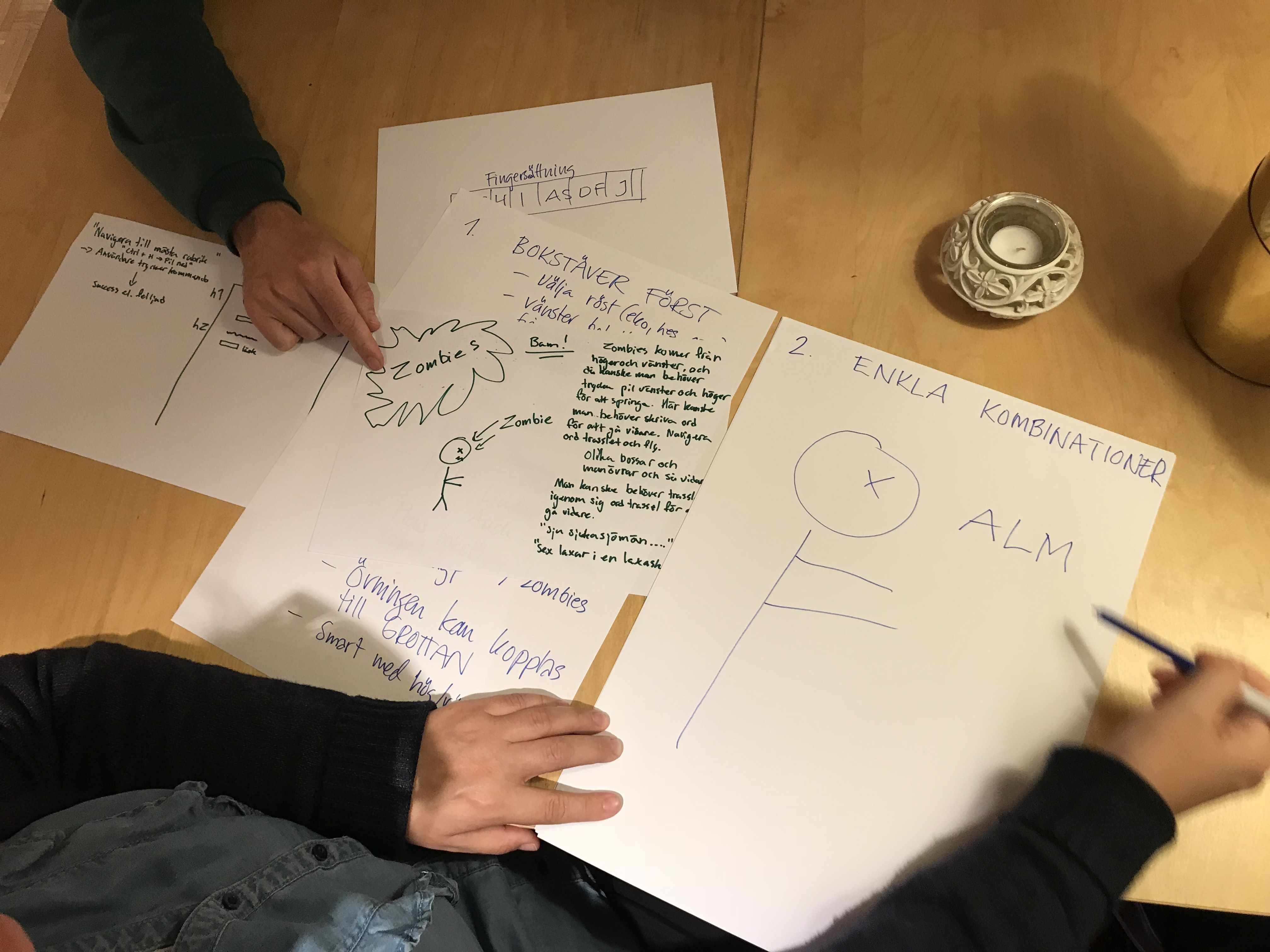 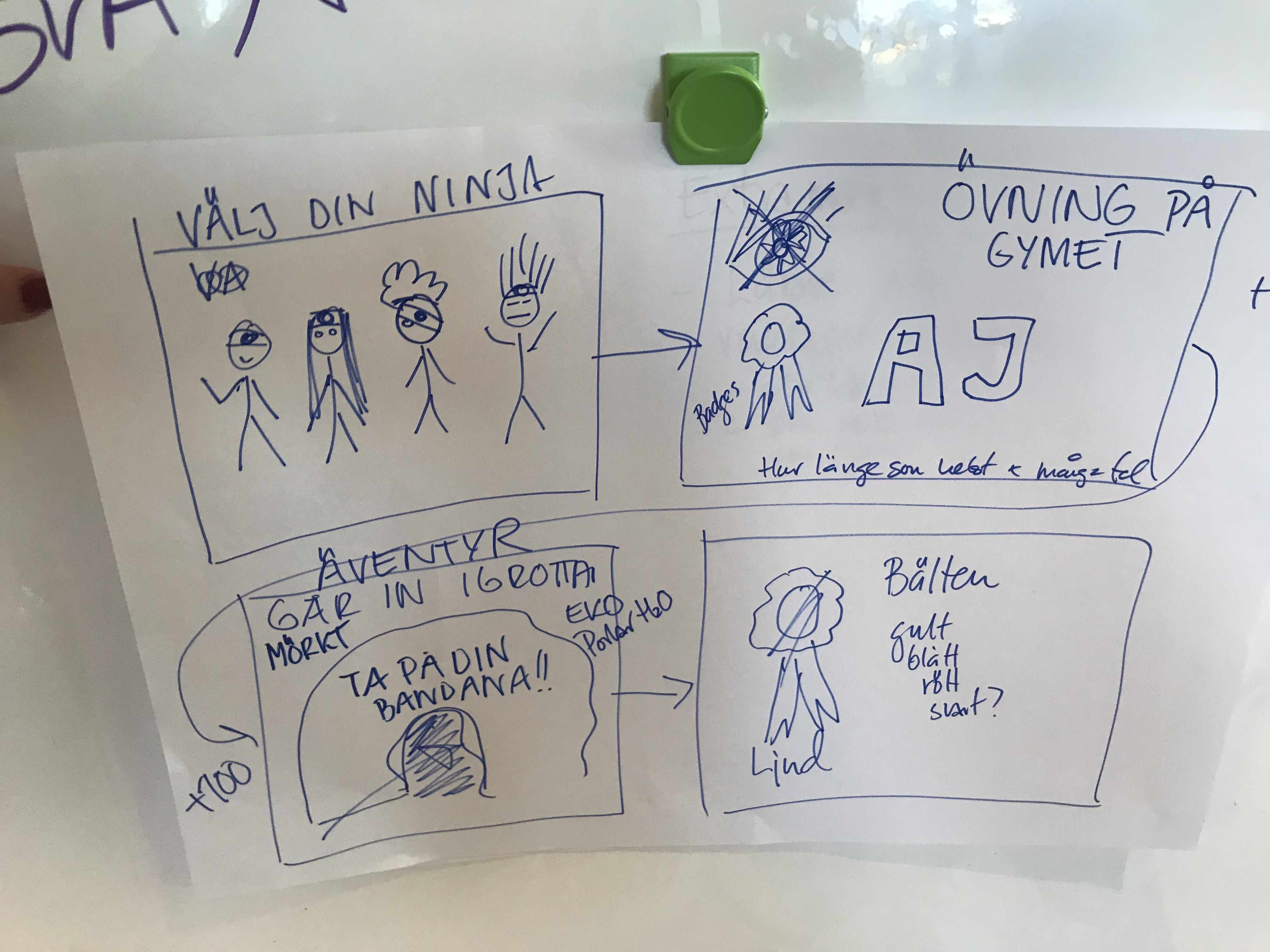 The concept is built on the research about how to learn the keyboard in a pedagogical way, based on the market analysis and interviews with people how has taught kids to type on a keyboard.

With these steps to learn in mind we found inspiration from a tool that is used to learn eye tracking. From Look to learn that use 5 areas of learning eye tracking, created by Tobii Dynavox, read more Look to Learn.

So this is the ground that we wanted to build a gaming experience on, with a ninja theme. Taking inspiration from common and populaire games like the candy crush saga where you level up in visualisation of a path. When everyone is starting on the easiest level continuing to more advanced levels.

We started by drawing simple sketches on paper, where we began with the core interaction. This is where user gets to know which letter or word the are supposed to write, in our prototype we started with f and j. Then we made prototypes in Adobe XD. 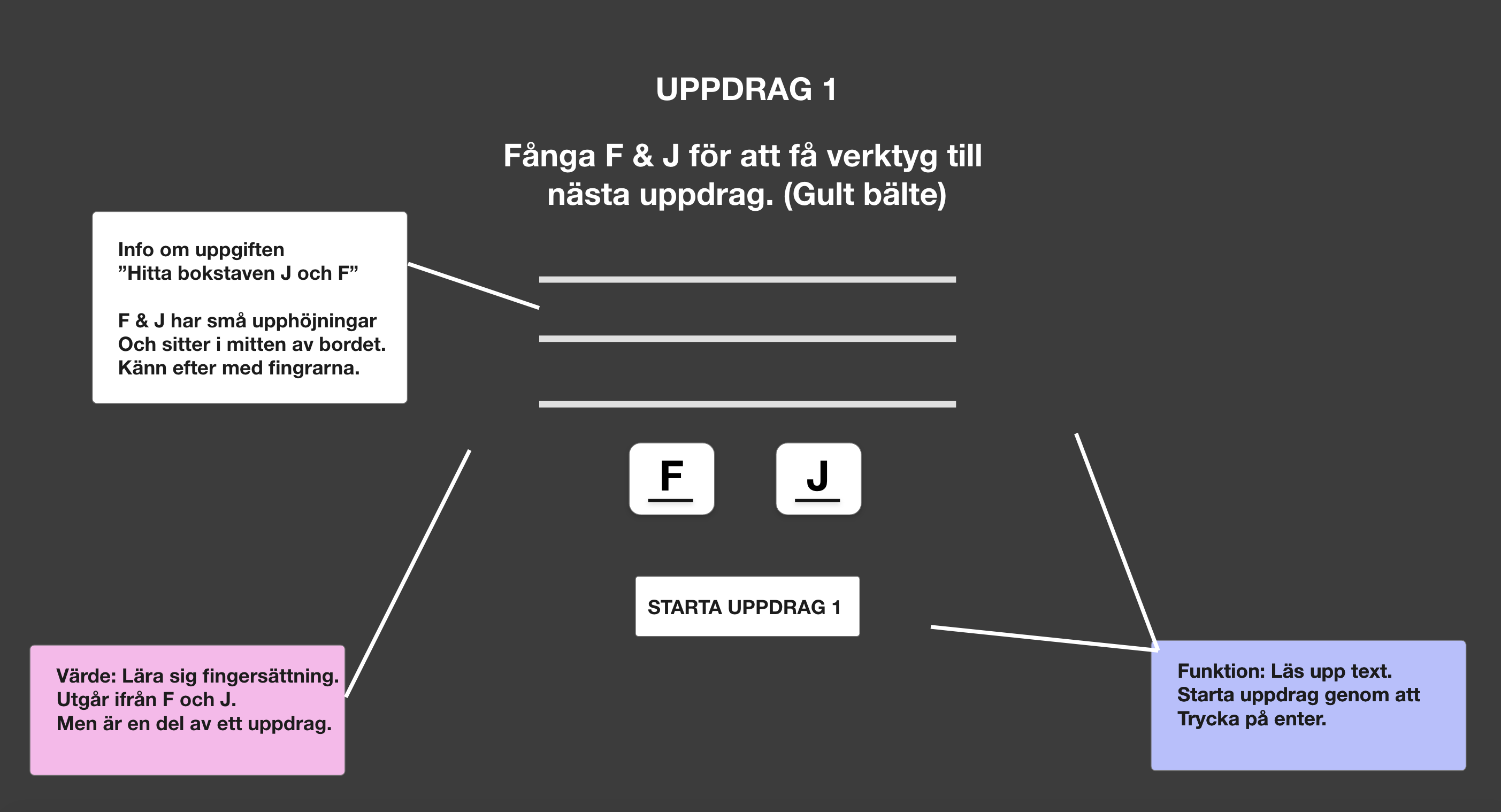 The challenges are that there are sound feedback that needs to happen in this interaction. First there needs to be a text to speech that reads the letter the user is supposed to write. Then a sound if it was right or wrong and third the letter that the user actually wrote. At the same time we need to think about if the user has a screen reader on and if the text to speech and screen reader will be colliding saying the same things creating an echo that is not pleasten for the user. We will write a blog post about sound interaction only for this project, as it is very complex. 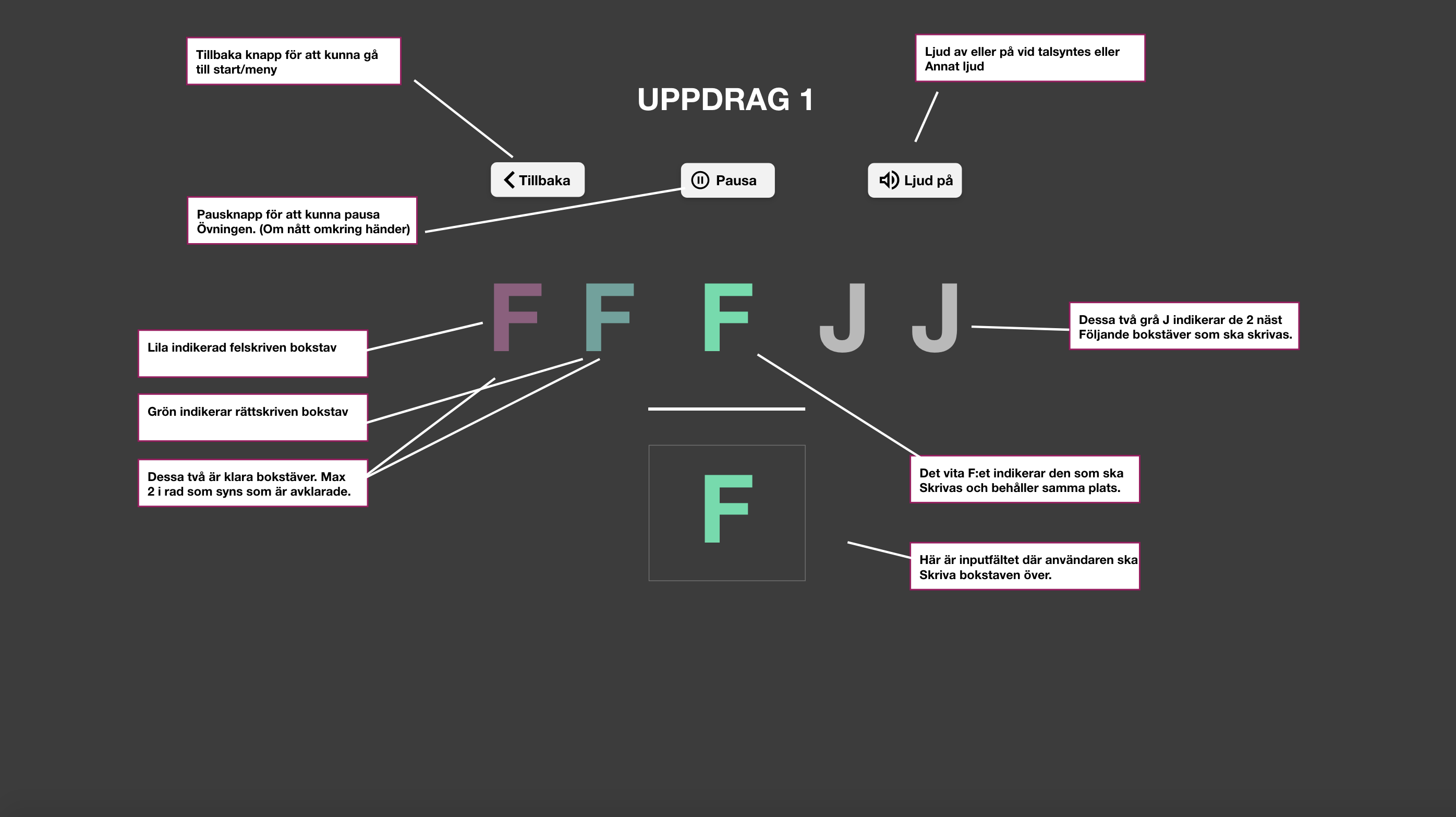 We also need to have visualisation on the screen for those of us who can see and are using a zoom tool. So in a simple interaction pressing one letter on the keyboard a lot of things needs to be considered. 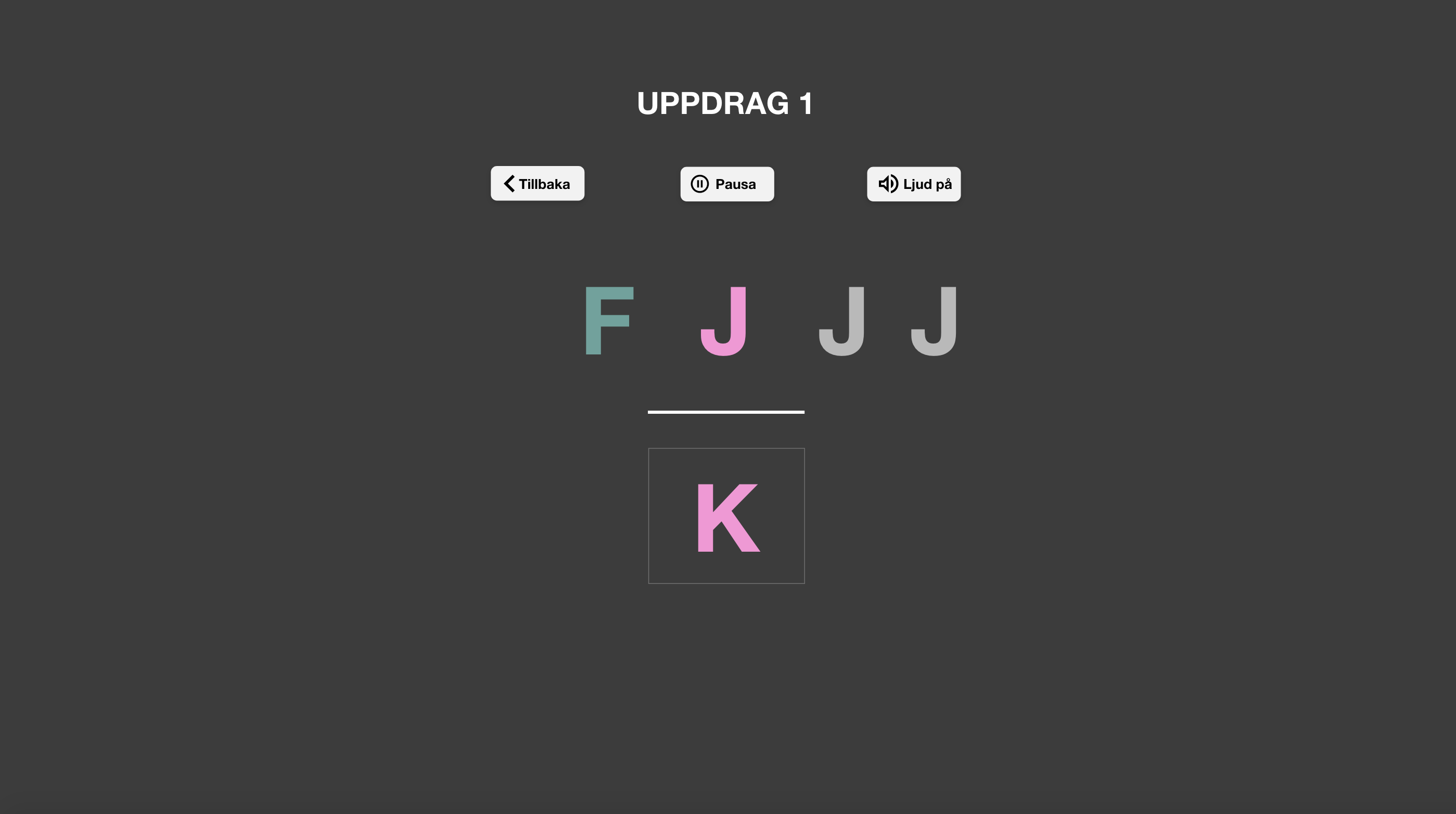 This was the first challenge for the developers to make and finding and adding sound resources to the prototype, both text to speech but also sound effects.

Then we wanted to add the first step with integrating with the keyboard without being right or wrong, so we added the Ninja theme. First of with an introduction to the game. After that choose your character by using arrow up and down and pressing enter. Which are important keys to learn because people using a screen reader often use these buttons to navigate.

Pressing enter to start the games and different missions are also important because if you have a visual impairment, you won’t you the mouse only the keyboard. 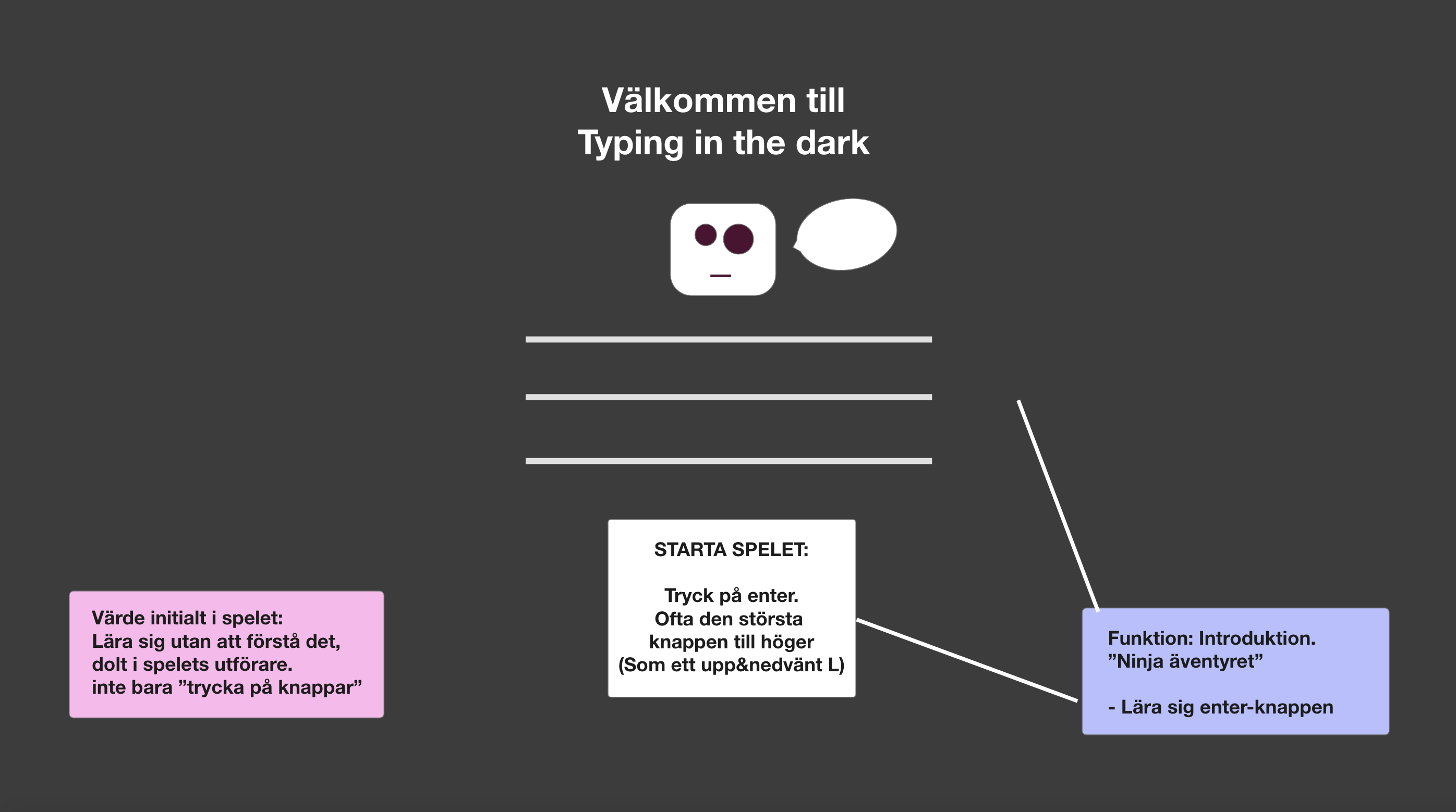 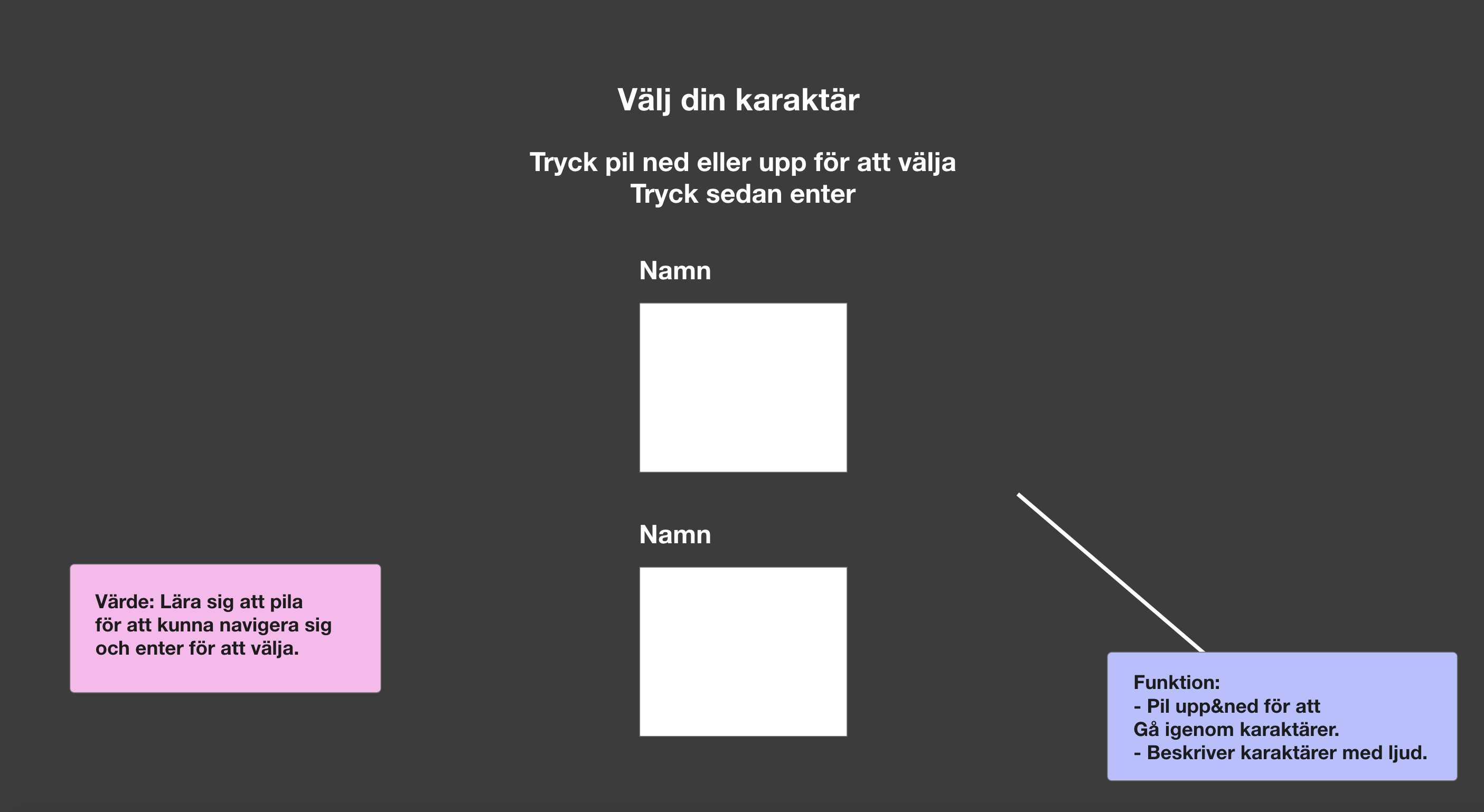 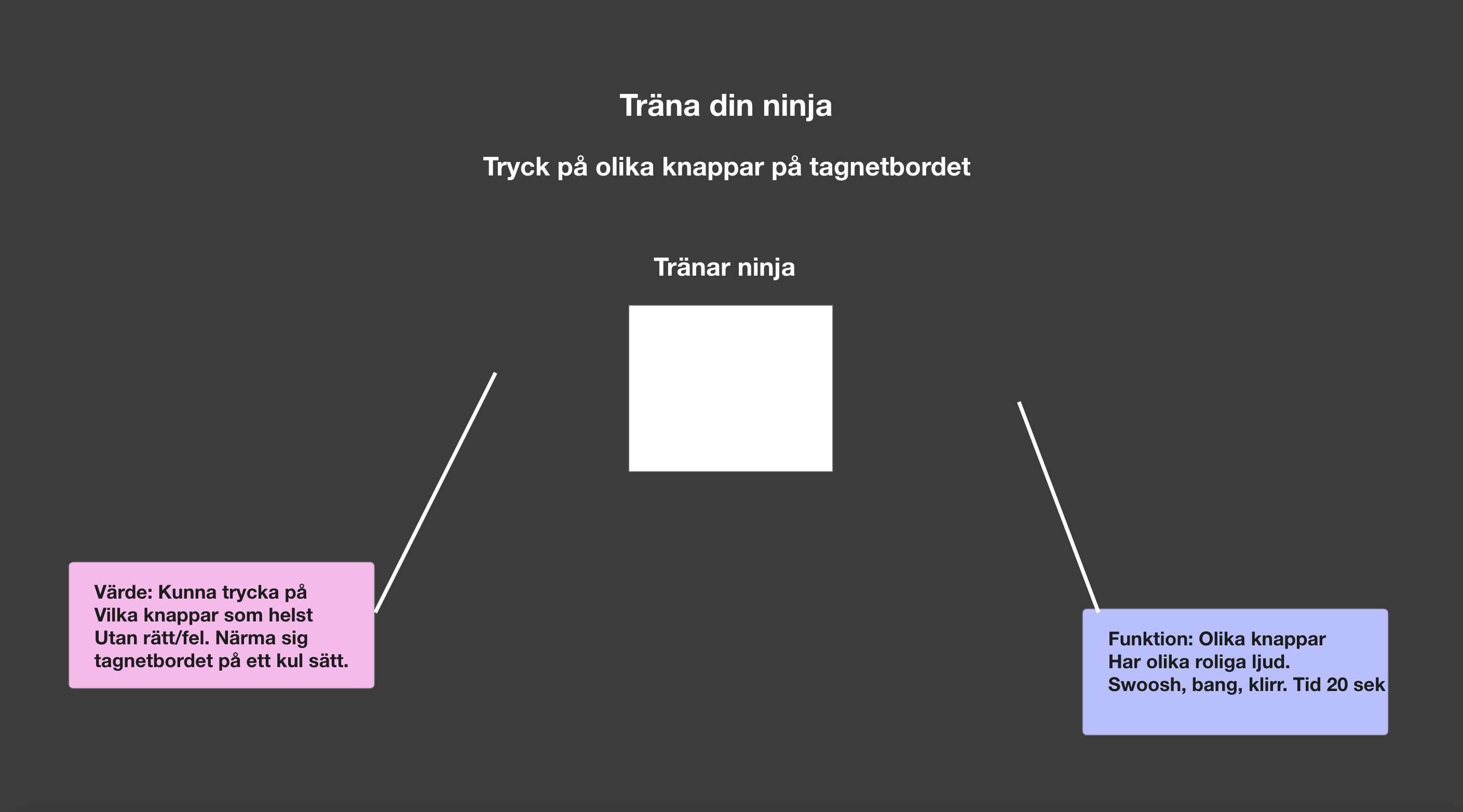 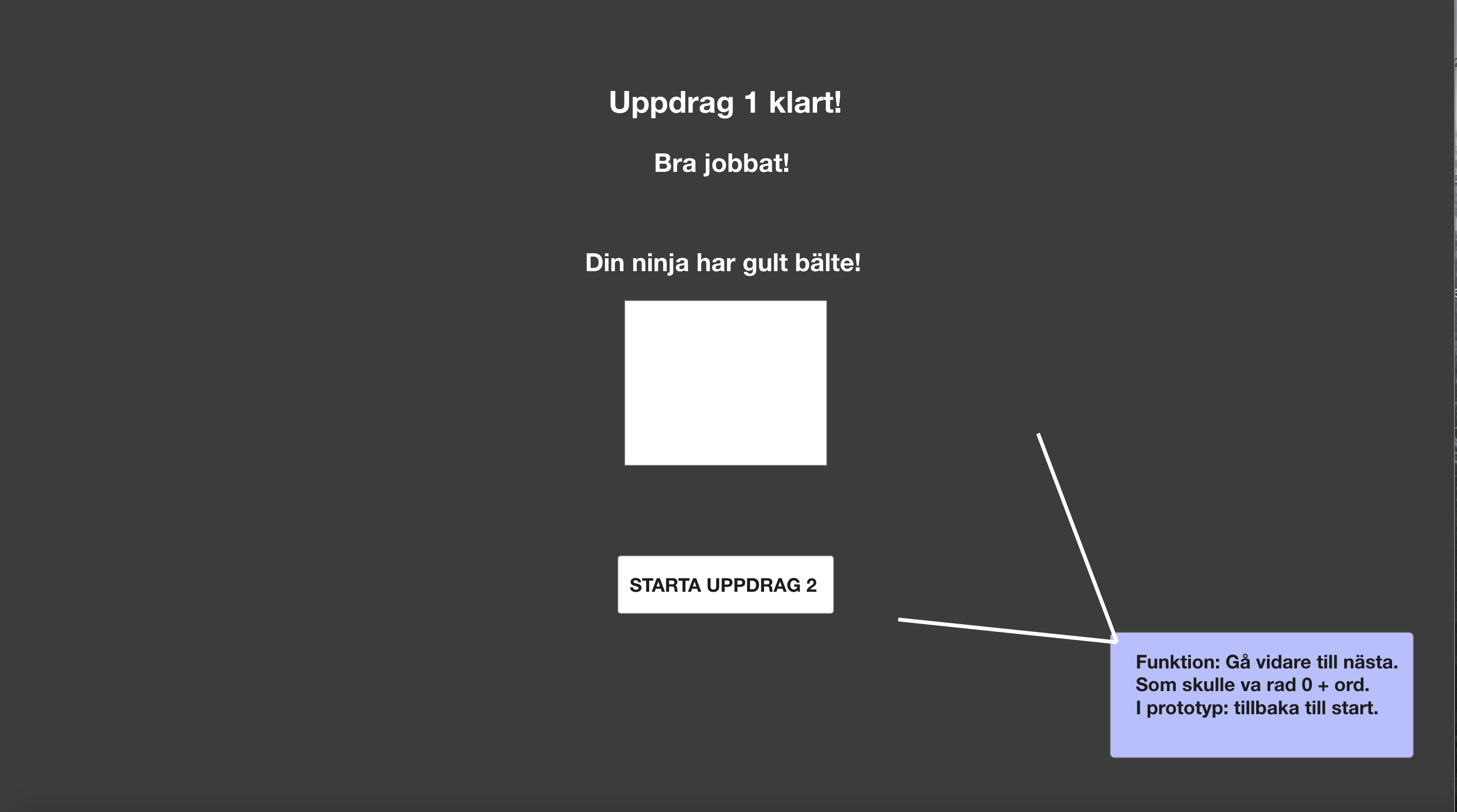 Interaction with the keyboard

We added more content to the prototype and a path to the different levels. 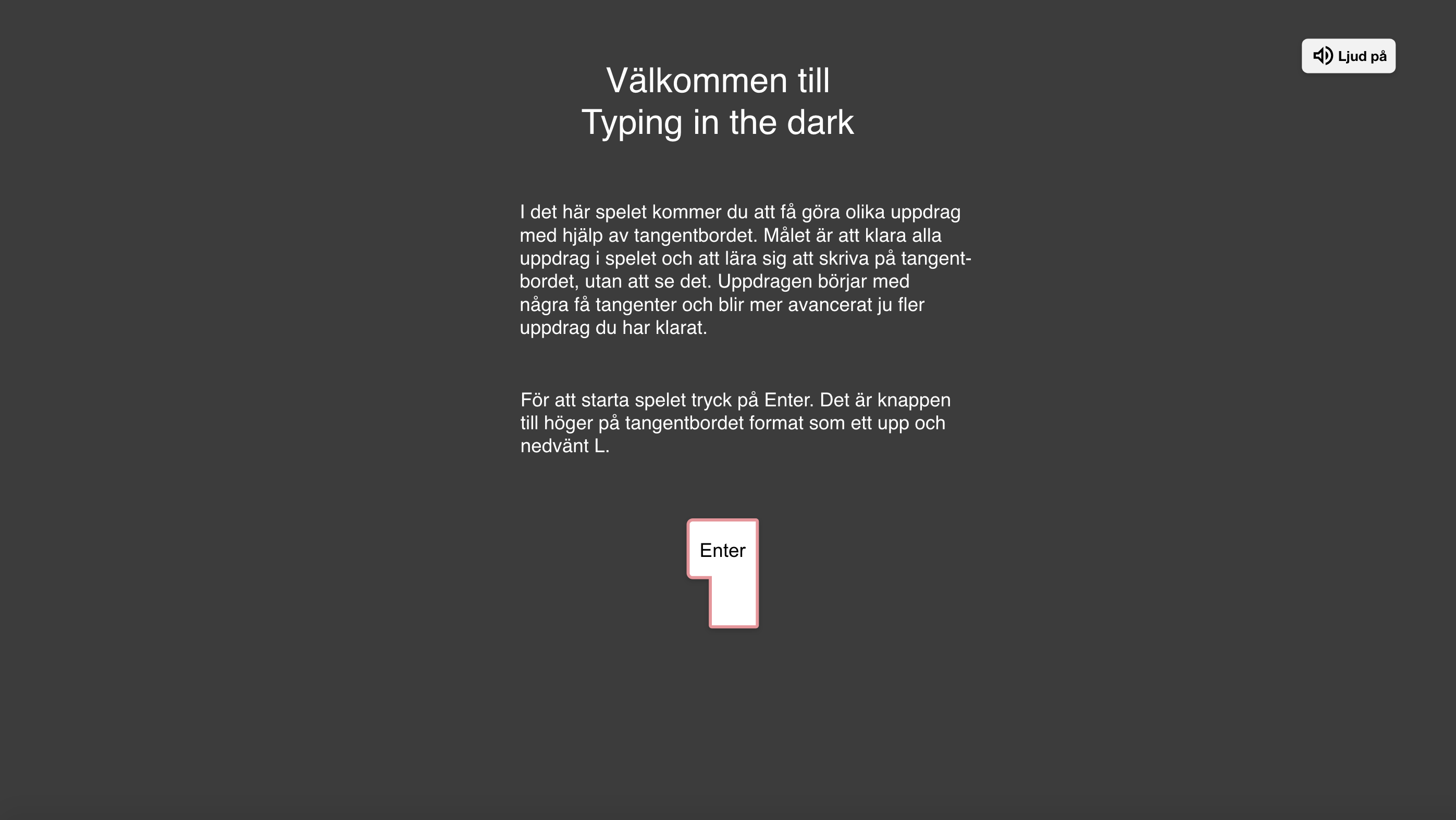 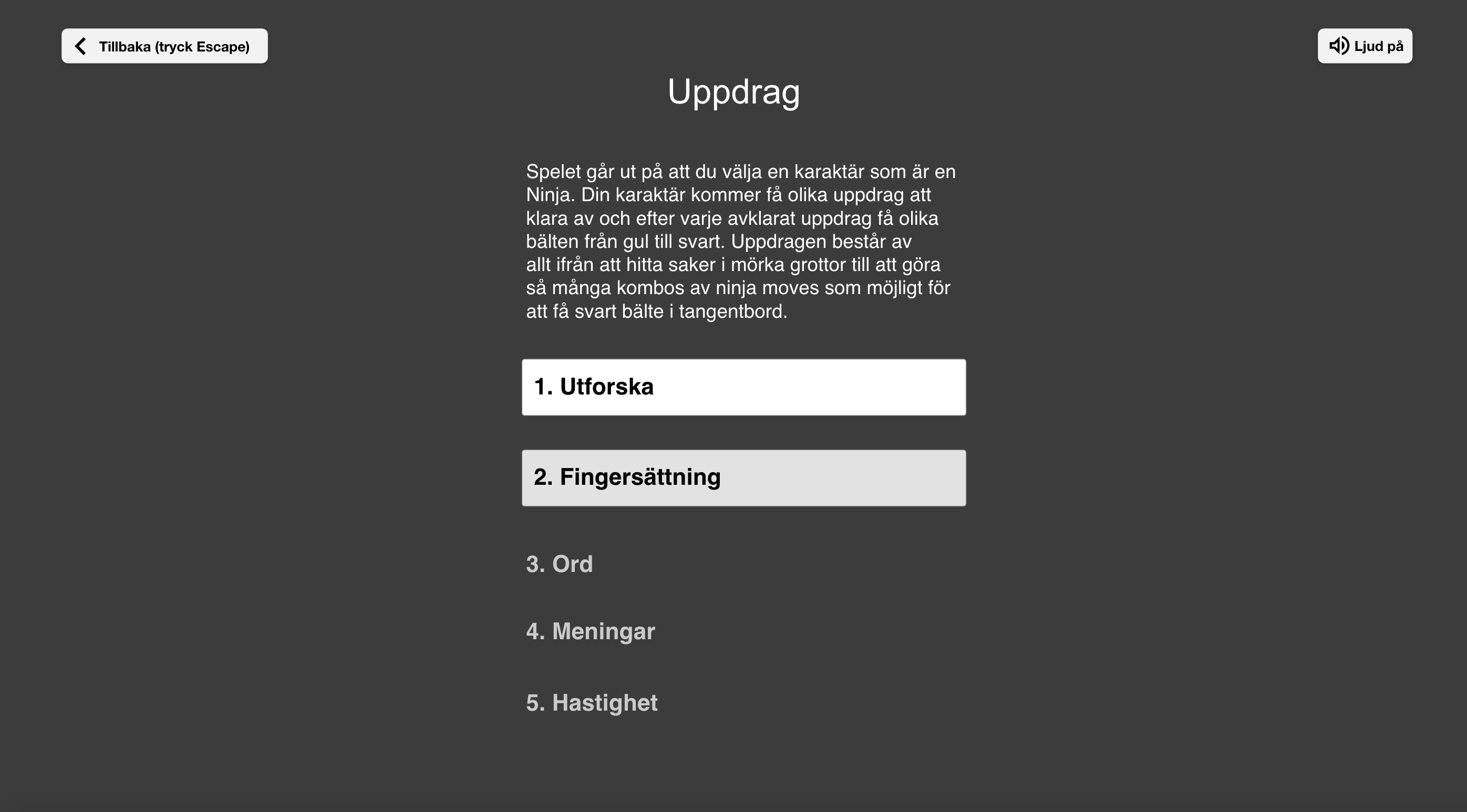 We added characters with short descriptions of how they look as image description, so the user could choose the one they like. 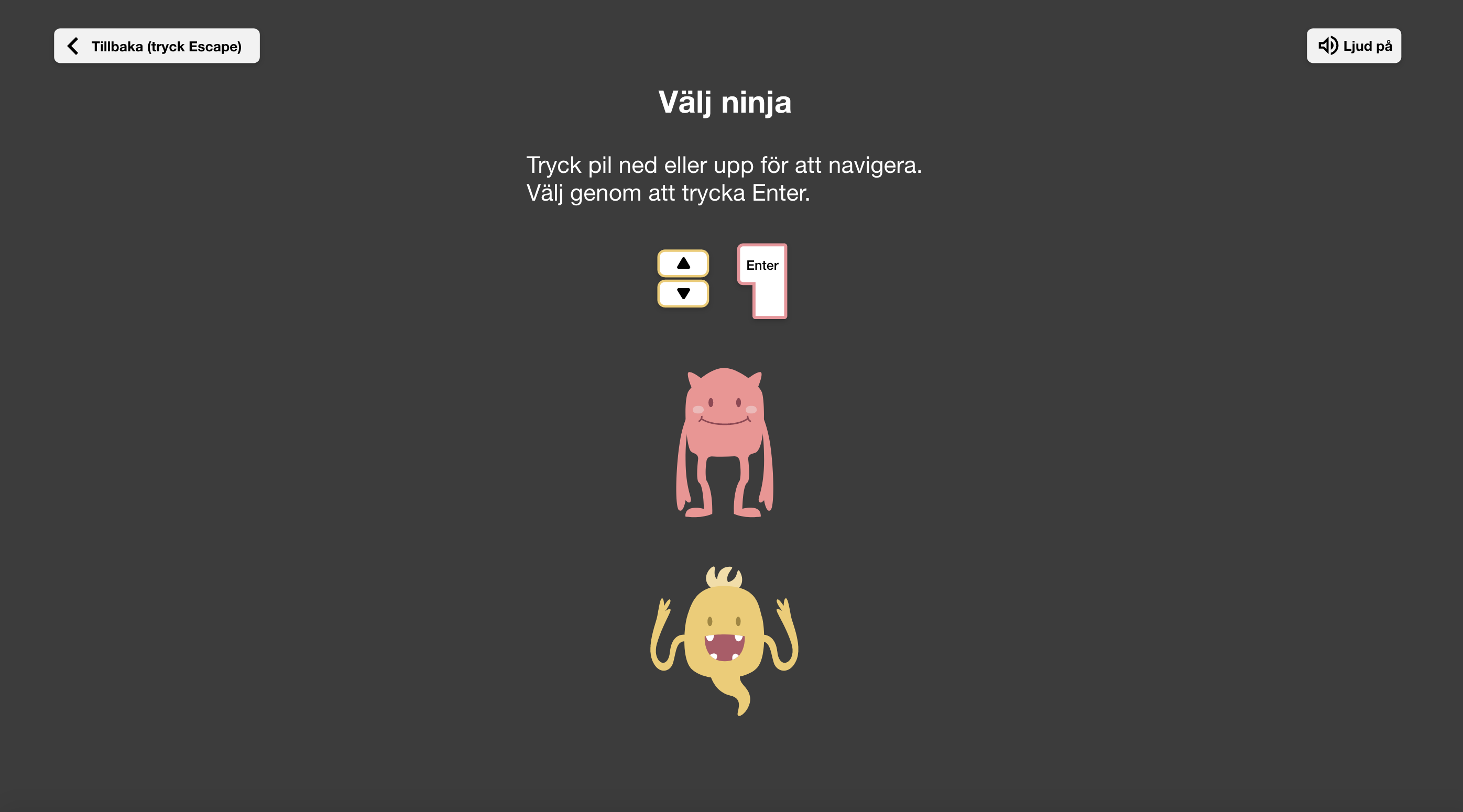 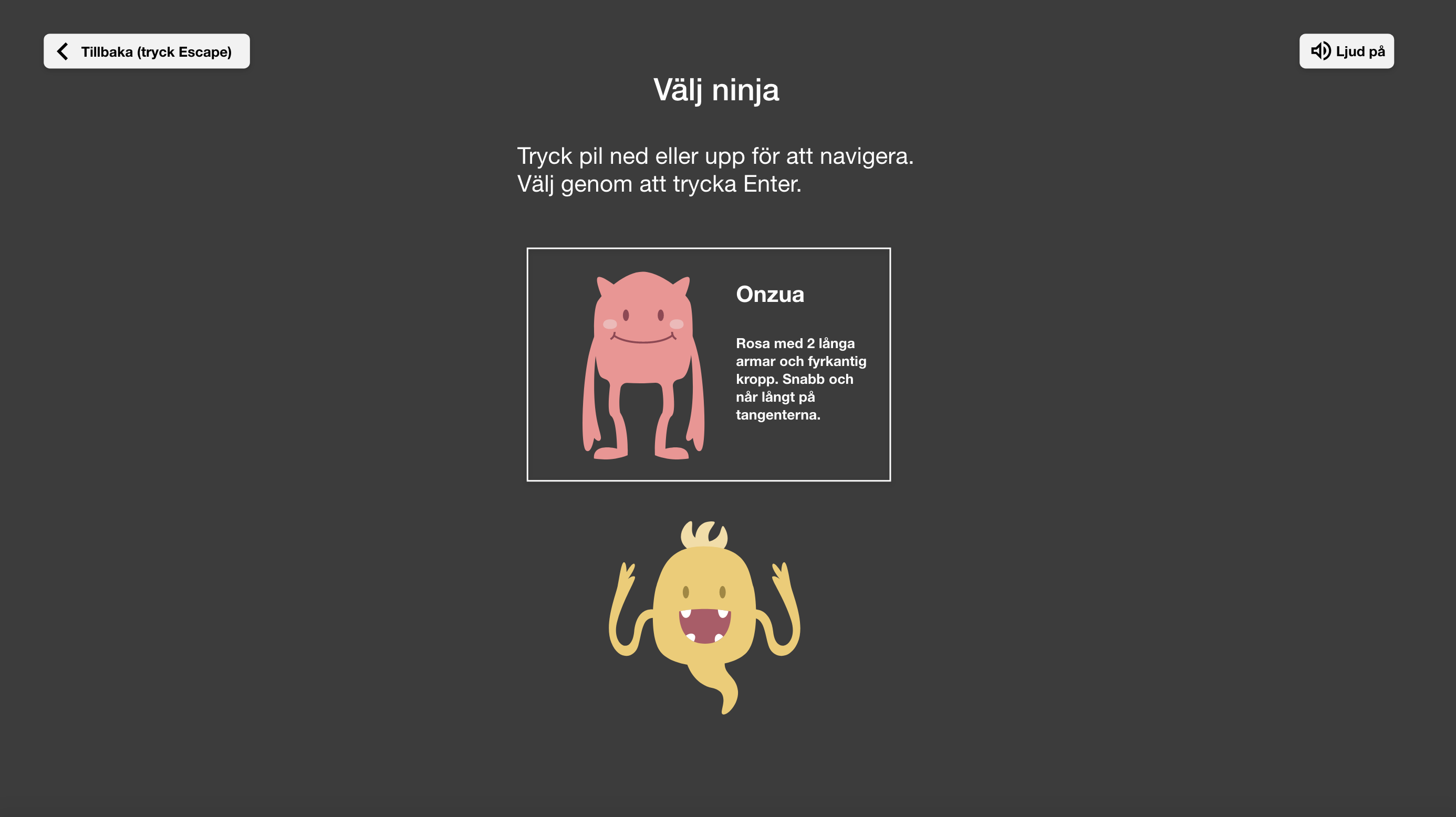 We added a step to train you ninja, so when the user is pressing different buttons they just make different sounds like boxning or sword sound effects. This is important as a first step of just interacting with the keyboard and having fun. After this training of the ninja character, they get a yellow belt in karate as a reward to keep the user motivated to get more belts. 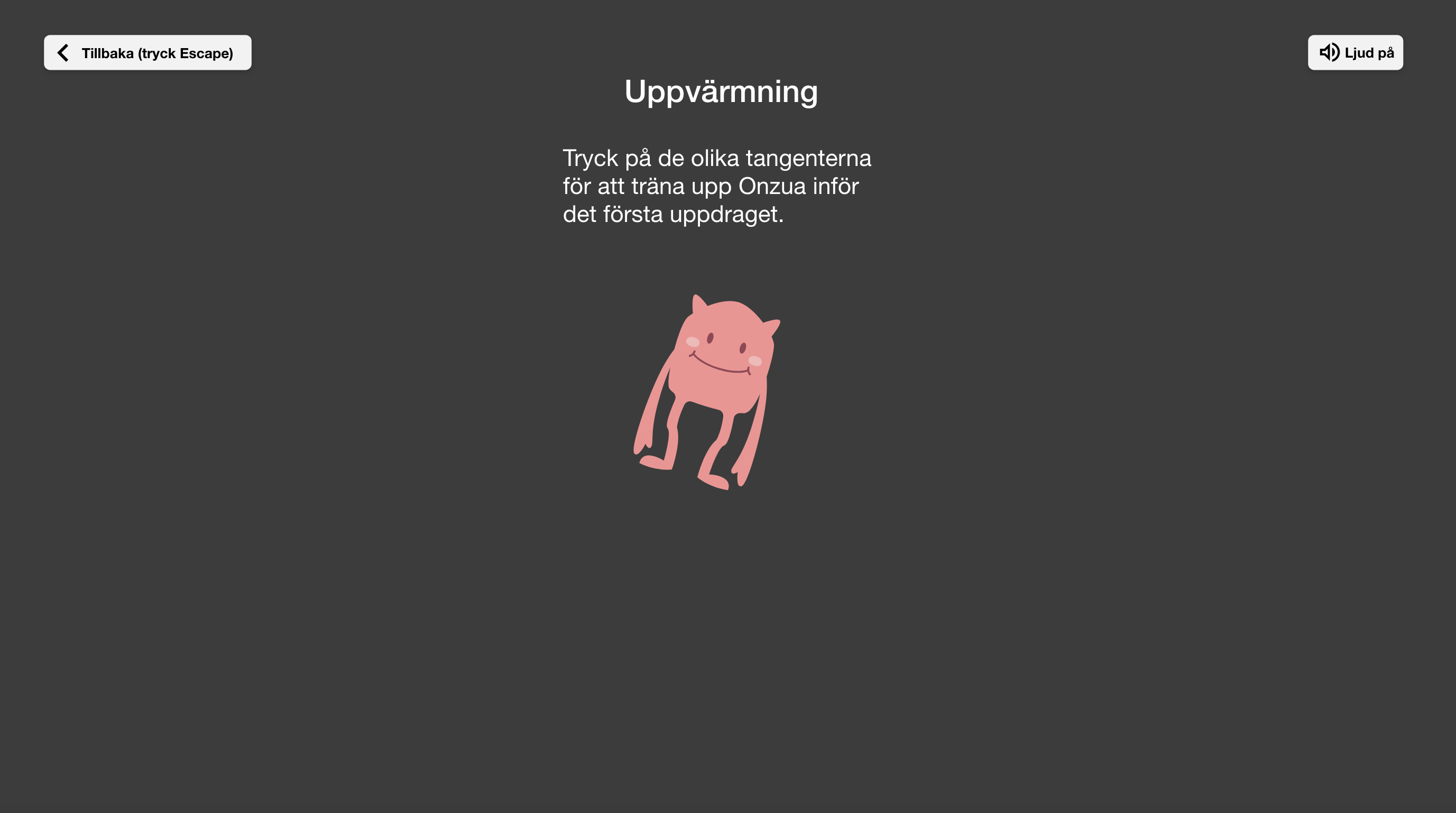 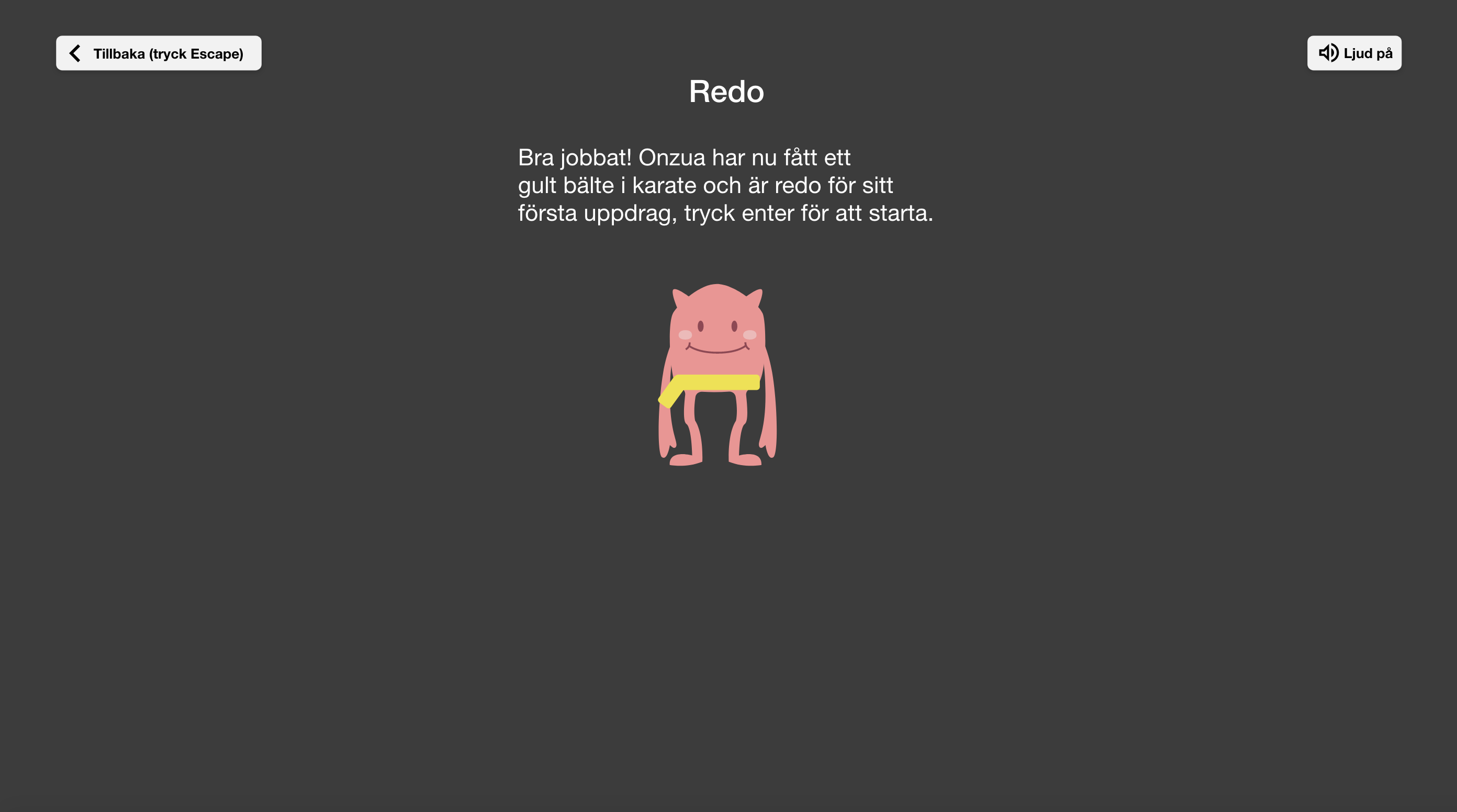 The step after that they go in to the core interaction as challenge 1 with finding and using F and J. So that we follow the concept of learning we have set up. We also got feedback from a user with a visual impairment using a zoom tool the have the input field and the letter you’re supposed to write at the same place, so we changed that visualization. 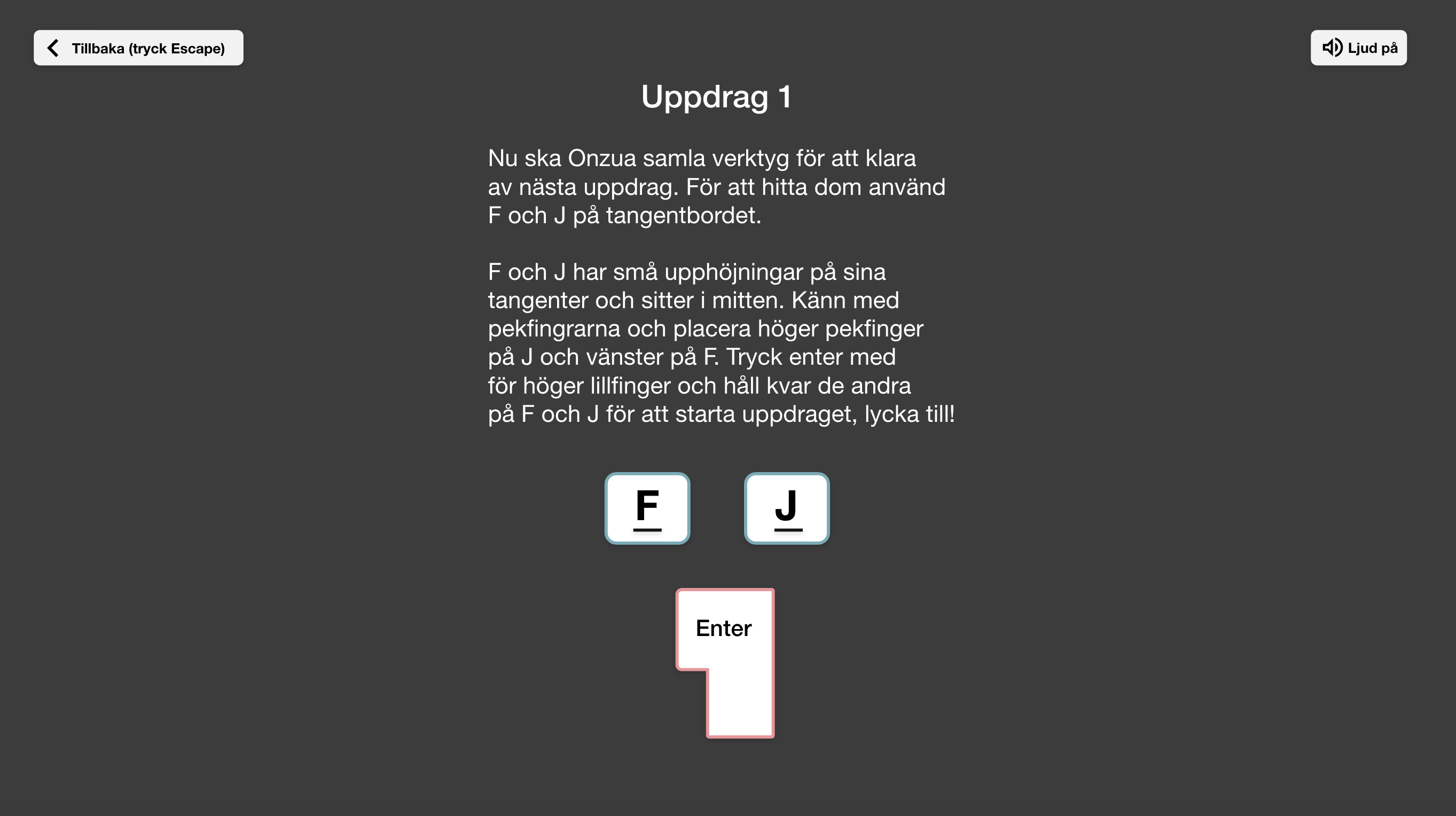 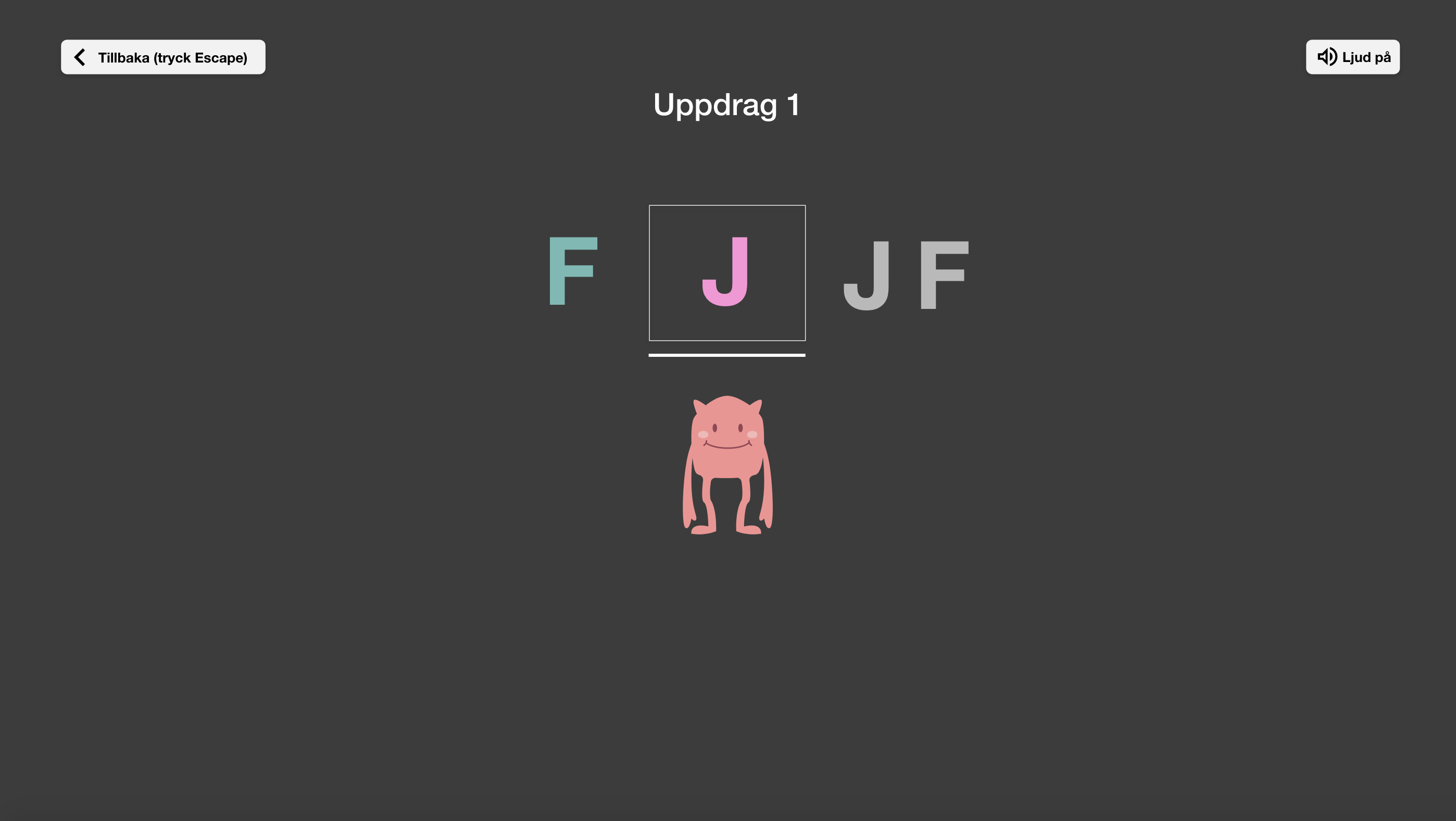 In this project we want to focus on the first steps of interacting with the keyboard because our primary target group are beginners. So step 3, 4 and 5 haven’t in this phase been explored yet.

Now that we had a concept and some developed parts of the prototype that both had keyboard interactions, sound feedback and content we wanted to try it with a user of our target group. So we met with a 10 year old boy in 4th grade who just started to learn how to type on a keyboard. Here’s an image of his laptop he uses in school with some stickers on some of the buttons like f, j shift for example and a braille display he can read and write with. 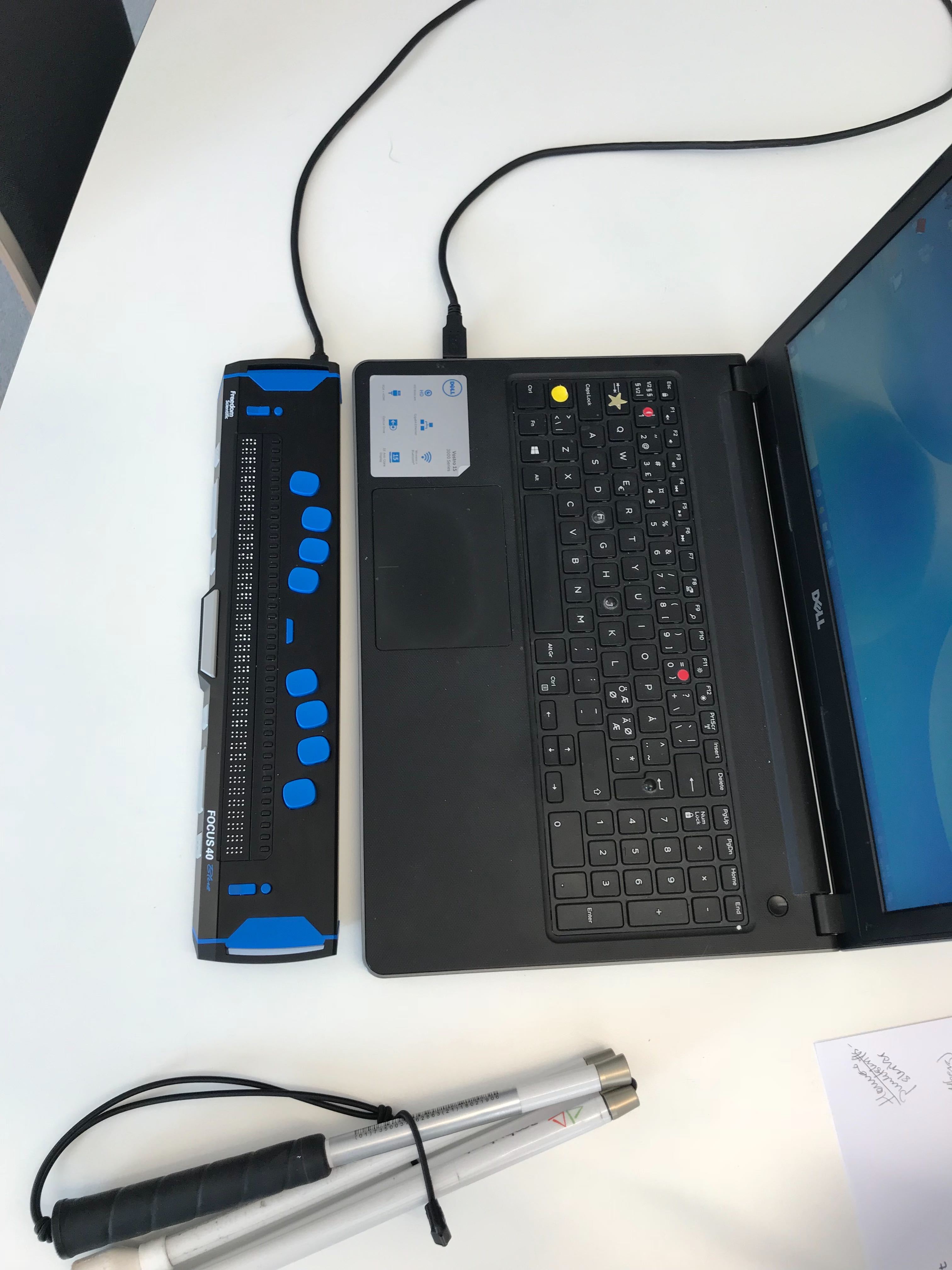 In the user test we tried the concept, interactions and sound feedback from start, choosing ninja, training ninja and the first challenge with F and J.

Summary of the user test

The things that work well are the ninja theme, the user like the theme and thinks it’s fun and different from other typing tutor games. He understands the concept of training the ninja and sound feedback is enough. He feels motivated to want to get better and wants the black belt in karate as something he wants to accomplish. So the overall concept of gaming, missions, reward and ninja theme works well with this user.

Some things that can be improved is the timing of the sound, text to speech and some navigation. It is sometimes hard to know when then exercise starts and ends. The user realise when he press the wrong button at the f and j interaction and quickly press the right button so for this user he wouldn’t need a wrong indication feedback on this first level.

We asked if he had an idea of what would be a fun challenges after this level and he said that it would be nice to write words, maybe talking to another ninja. Also the whole alphabet is a fun mission to do and learn. So mostly something with letters or words in a fun context. 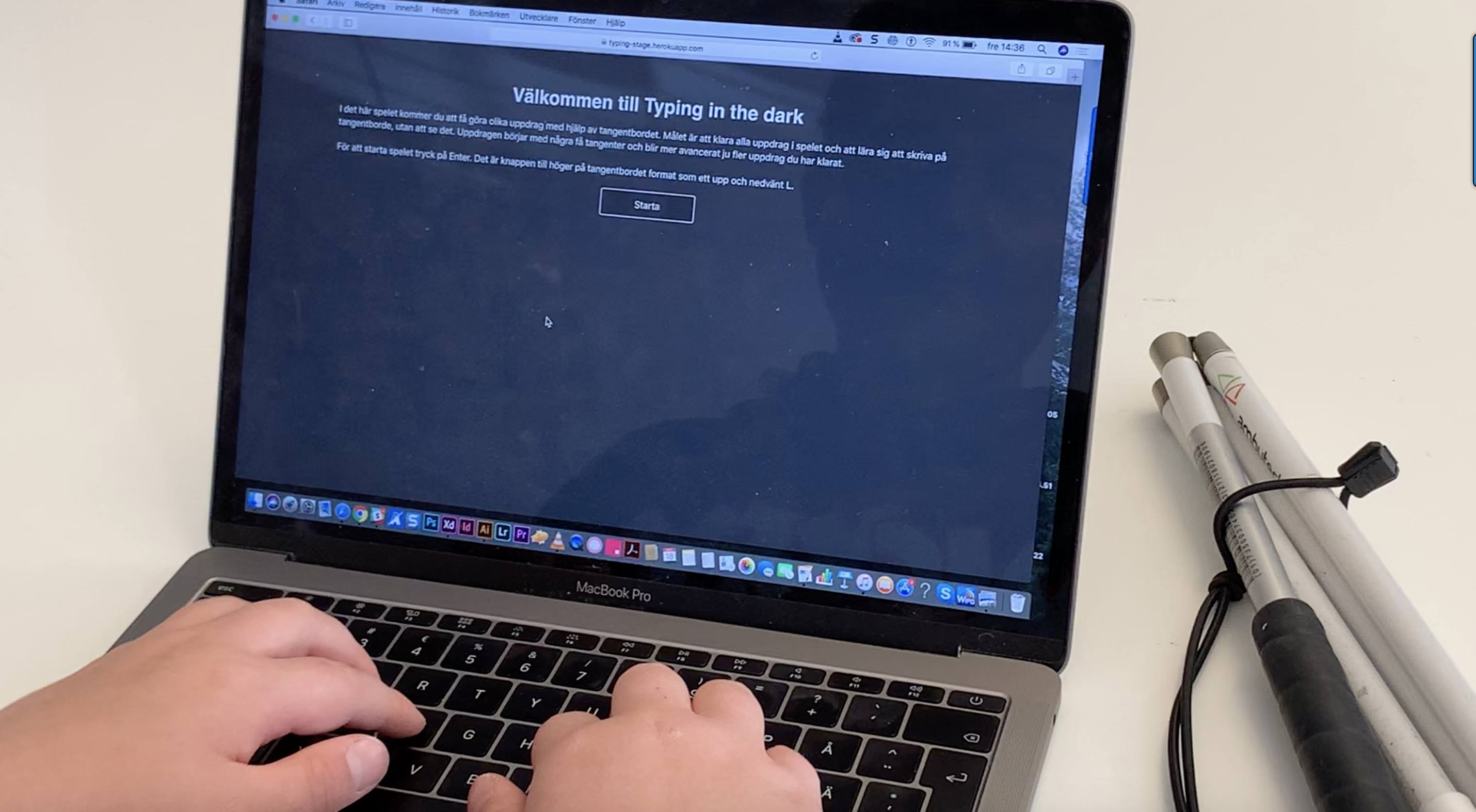 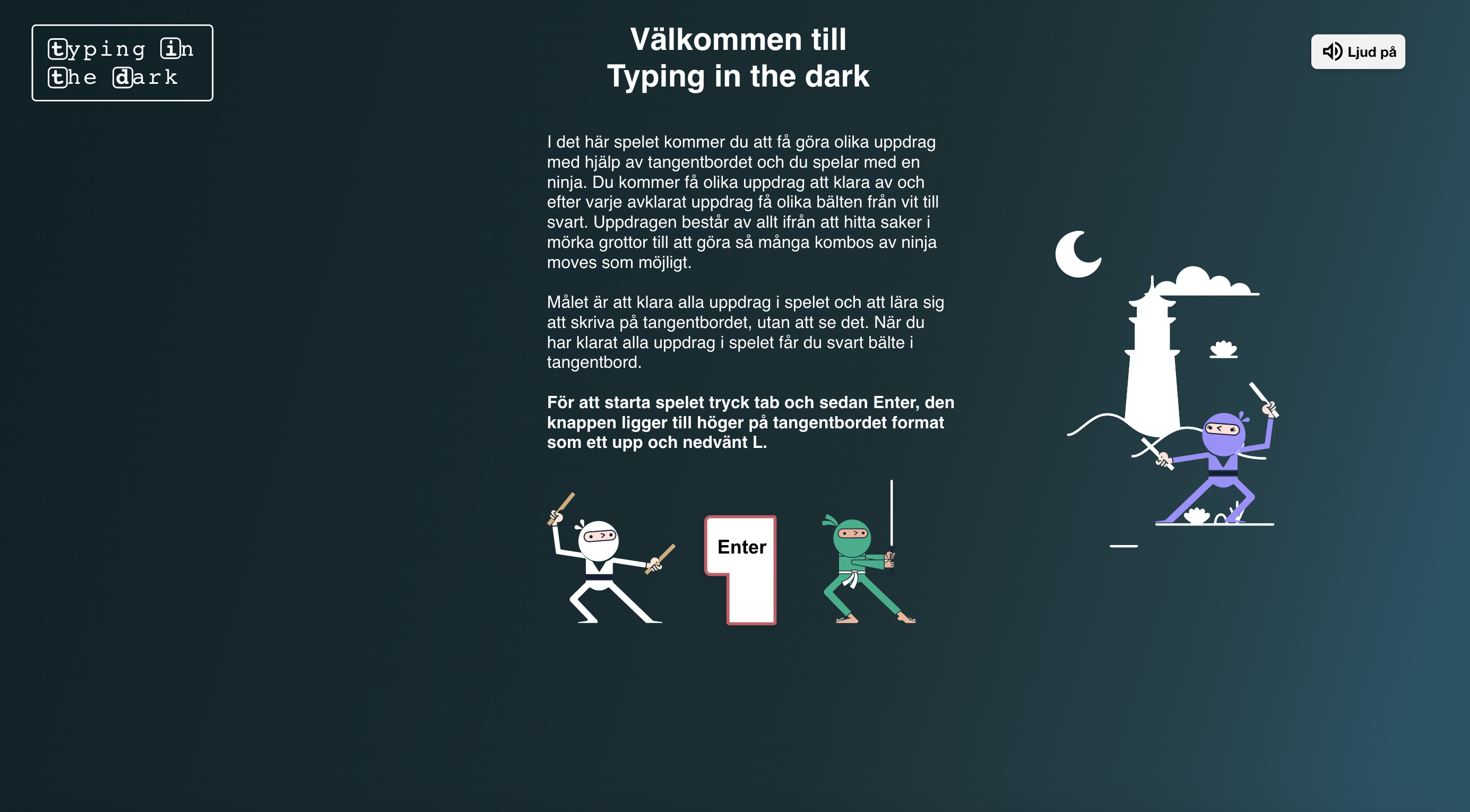 Just play audio? - audio and speech in a UI